During paint inspections, our surveyors see a lot of paint defects passing by. In this article we explain the defects ‘Runs, sags and curtains’.

Runs, sags and curtains are the downwards movement of paint that can appear shortly after the application and before the setting of the paint. Sagging is usually apparent on local areas of a vertical or curved surface. When sagging occurs over a long distance this is described as a curtain. If the wet film thickness is much too high, excessive sagging can result in pools of paints forming on horizontal surfaces or in corners which could resulting in cracks after curing. 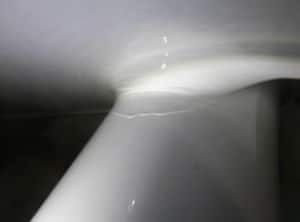 Extreme sagging occur when paints have been applied in coats which are too heavy and is commonly a result of wrong application technique (overlapping) or too short recoating interval.

Note: Buffing and/or polishing of a polyester – urethane finish is generally not accepted and will only be accepted for very small areas after consultation and written approval of the owner’s representative.

Due to the remedies before mentioned, you are able to prevent runs, sags and curtains. The CCS surveyors are more than happy to advise you or assist you with the solutions. 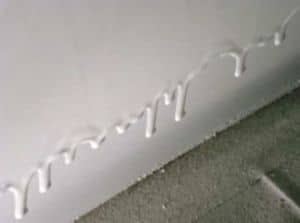