Let’s look at the T-Factors as a link between a specification and a successful application.

Superyacht coatings have been the subject of many discussions in the last few years. These discussions have often focused on the problems that we have seen on a number of yachts. These range from small discolourations, to loss of superstructure gloss, to the complete failure of the coating system on both the hull and superstructure. Every time such a problem occurs the same questions are asked: What happened and why did it happen? 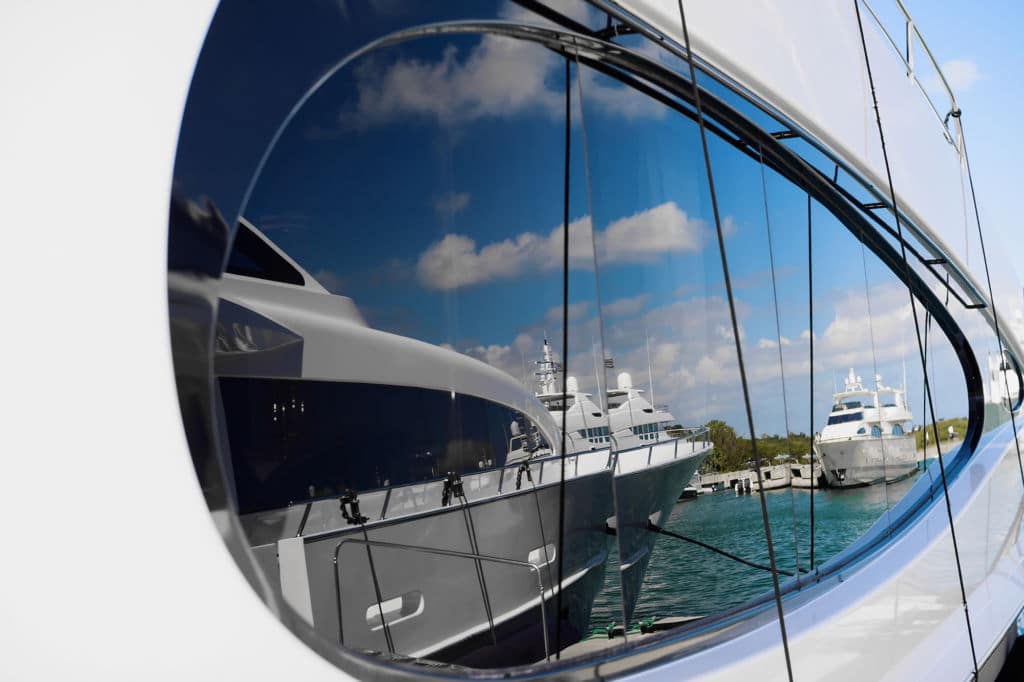 Since 1991, CCS has been involved in the inspection of yacht coating problems for coating suppliers, yards, applicators and owners. Based on this and through the experience gained during the inspection of the application process during the construction of more than 60 superyachts in Europe, we have tried to establish the main factors that influence the performance of the yacht coating systems: These we call The T’ Factors.

These T Factors (Temperature, Thickness, Time and Tolerance) form the link between a successful application and the original specification.

It goes without saying, that a good specification forms the basis for a successful coating application. Each coating supplier has its own views on how to formulate the products, but in each specification the following types of coating products can be identified:

Let’s look at the T Factors as a link between a specification and a successful application.

The speed at which the physical and chemical processes in a coating material take place is directly related to the temperature of the material. This is not necessarily the same temperature. The rule of thumb says that drying and curing times are doubled with a drop of 10°C of the material temperature. Consequently, the minimum overcoating is doubled as well.

If, under these conditions, the application procedures are not adapted or completely terminated, the chances of future problems are evident due to possible solvent entrapment and retarded curing.

High temperatures may form another risk for a good application process. These conditons can cause the solvents to ‘flash off, thus preventing the coating from forming a closed film. Proper thinning and/or adaption of the spray technique can solve this potential problem.

Time is a precious entity during the construction of a yacht, in particular at the moment, when yards are working at top speed to accommodate the strong demand for new yachts. Many yards are under heavy pressure to deliver yachts as fast as possible (and sometimes faster than possible). With fixed deadlines to meet, any delay in the construction process will inevitably have its impact on the time available for the coating contractor to f i nish his contract. On many occasions the coating contractor is then requested to speed up production to meet the delivery date.

With additional workers and double shifts, the production can be increased considerably. However, coating materials have their limitations, specified in the technical data sheets as minimum drying times, minimum curing times and minimum overcoating times. These limitations must be observed as they are basic laws of physics and chemistry; they cannot be modified!

The recommended thickness of the individual coatings in a coating specification are determined by the formulation, the function and the coating supplier’s technical considerations. Below these recommended dry film thicknesses, the coating just may not provide the protection of appearance that is expected. This applies to primers, topcoats and barriercoats, but obviously not tofillers which are typically applied at variable thicknesses just to provide a smooth surface.

The topcoat thickness is of particular importance. The gloss and colour retention is provided by a very thin coating of just 50-100 microns. When applied at, say 35 microns, one cannot expect the same topcoat performance. If a car generates 30% less power, the performance will be considerably affected; why should a topcoat be different?

The application of coatings at too high a thickness creates another potential problem: solvent entrapment. If, due to a heavy application, the solvents do not get a chance to escape, they will remain trapped in the coating film. Later, during exposure to hot, sunny conditions, these solvents will be forced out, and will destroy the integrity of the coating. For thicknesses, the message is loud and clear: stick to the specification!

This is probably the most important aspect of a coating application. The rules are set by a specification, technical data sheets, a working specification and good time planning.

However, in the real world the applied thickness appears to be a bit high, temperatures at the weekend were lower than expected and the coating contractor just lost, again, a week due to late availability of the main deck section. In other words, there are always deviations from the specification. Deviations from the specification will not always lead to problems or premature failure of the coating system. The actual performance will also depend upon the tolerance of the coating materials to ‘abuse’.

For example, some primers and barriercoats will not fail when applied at double the recommended thickness, but others have a limitation at 150% of the recommended thickness. The use of materials with a high acceptance for abuse’ should however, not be an invitation to a less careful application of the coating materials. The name of the game is still, stick to the specification. Nevertheless, from a surveyor’s point of view it Is important to know how resistant the individual coating materials are against “abuse.

Going through the various phases of a coating application this question may arise: Who is supposed to assure that the application meets the specification? The first line of defence is a good working procedure, to be agreed upon by the coating contractor and the yard’s coating supervisor.

Far the sake of this article, let us focus on one aspect of such a working procedure: the mixing of the filler. According to the coating suppliers application instructions, both components must be mixed thoroughly to a homogeneous mixture. This can easily be achieved by mixing full units in a suitable mixer or by using the mare sophisticated mixing machines with a static mixing device fed from 200 litre barrels. Mixing estimated quantities by hand means incorporating a potential risk to the coating system: the risk of residual, unreacted chemical components in the filer.

Coating manufacturers generally allow for a slight deviation from the designed mixing ratio, but our goal should be that there is no residual chemical components at all in the filler. So, why not use the available technology when dealing with the protection and appearance of a multi-million dollar superyacht?

The whole approach of coating applications on superyachts should be in line with the standards applicable to the rest of the yacht. Once the total working procedure has been agreed upon, the properties of the applied materials must be inspected. This is the second line of defence: quality control by the coating contractor and the yard’s coating supervisor.

The properties that should be inspected during and after application are’

One may ask if all of the above-mentioned testing and recording is really necessary. The answer is a loud and clear: YES. During the last few years we have seen some serious problems with coating systems on superyachts. Some of these problems were related to material and specification, but it is fair to say that a major part of the problems could be traced back to four T’s: TEMPERATURE, TIME, THICKNESS AND (lack of) TOLERANCE.

What are you looking for?